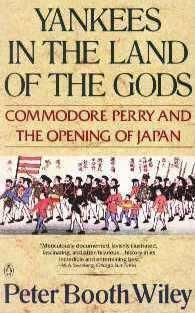 Yankees in the Land of the Gods: Commodore Perry and the Opening of Japan

Commodore Perry, having mustered a pathetically small fleet, set out in 1852 to open the doors of what Herman Melville called “the hermetic kingdom.” Japan had been literally cut off from the outside world more than two hundred years earlier by the powerful Tokugawa shoguns. The first Tokugawa was Tokugawa Ieyasu, who was fictionalized in James Clavell’s Shogun. Perry boldly sailed into Tokyo Bay inviting the Shogun’s representatives to visit his ships where they were shown the sophisticated swivel guns mounted on the decks of his steamships and the marvels of the Colt pistol and rifle. Under constant threat of attack, the Japanese signed a treaty, which opened Japan’s ports to the outside world. For the first time Wiley has told the story of this pivotal event in Asian history from the perspective of both the Americans and the Japanese.

Yankees in the Land of the Gods: Commodore Perry and the Opening of Japan
Authoritative account of the expedition that opened Japan to the outside world

Empires in the Sun: The Rise of the New American West (with Bob Gottlieb)
A study of city-building and city-builders in an arid climate